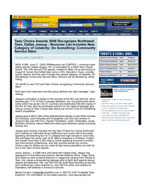 Kids learn from television and this group delivers the right message," said Jessup.

Jessup's nomination is based on the success of her film Just Yell Fire, which teaches girls 11 to 19 how to escape attackers; her non-profit of the same name which has grown into 41 countries and distributed 500,000 copies of the film for free; and her worldwide activism for the rights of teenage girls. Jessup comes to Teen Choice after taking top honors in the Do Something award competition.

Jessup joins a Who's Who of the entertainment industry on the 2008 nominee list including: Josh Holloway and Evangeline Lilly (who did cameos in Jessup's film Just Yell Fire), Hayden Panettiere, Justin Timberlake, Jonas Brothers, Rihanna, Kanye West and others plus television series including Gossip Girl.

Jessup was recently inducted into the Hall of Fame for Caring Americans and is taking on international sex trafficking next month with a two-week speaking and teaching tour at 12 colleges and high schools in rural India. She will begin her senior year at St. Mary's Academy in Portland, Oregon and travels more than 5,000 miles a month speaking at women's events, law enforcement conferences, and high schools across the country.

Online votes for Dallas can be made at http://www.justyellfire.com with its link to the Teen Choice Awards.

About Jessup -- A CNN Hero and black belt martial artist, Jessup has appeared on Good Morning America, Montel Williams Show, Today Show, and others as well as being featured in magazines ranging from People to Teen. Her cause is empowering teenage girls to fight back against sexual assault and abduction. Her Just Yell Fire non-profit does seminars at schools and conferences, trains teachers in Just Yell Fire skills, and lobbies for mandatory self defense in America's schools.