SW Wash. teen works to save girls from would-be attackers 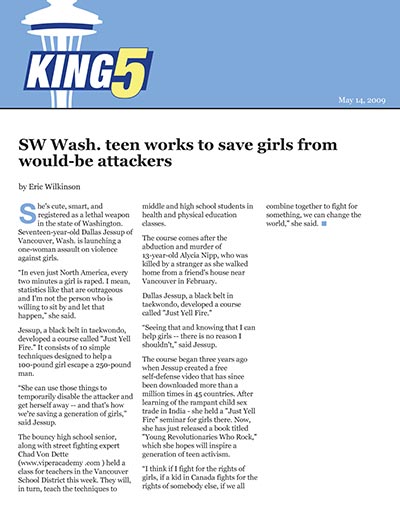 VANCOUVER, Wash. - She's cute, smart, and registered as a lethal weapon in the state of Washington. Seventeen-year-old Dallas Jessup of Vancouver, Wash. is launching a one-woman assault on violence against girls.

“In even just North America, every two minutes a girl is raped. I mean, statistics like that are outrageous and I'm not the person who is willing to sit by and let that happen,” she said.

“She can use those things to temporarily disable the attacker and get herself away -- and that's how we're saving a generation of girls,” said Jessup.

The bouncy high school senior, along with street fighting expert Chad Von Dette ( www.viperacademy.com ) held a class for teachers in the Vancouver School District this week. They will, in turn, teach the techniques to middle and high school students in health and physical education classes.

The course comes after the abduction and murder of 13-year-old Alycia Nipp, who was killed by a stranger as she walked home from a friend's house near Vancouver in February.

“Seeing that and knowing that I can help girls -- there is no reason I shouldn't,” said Jessup.

The course began three years ago when Jessup created a free self-defense video that has since been downloaded more than a million times in 45 countries. After learning of the rampant child sex trade in India - she held a "Just Yell Fire" seminar for girls there. Now, she has just released a book titled "Young Revolutionaries Who Rock," which she hopes will inspire a generation of teen activism.