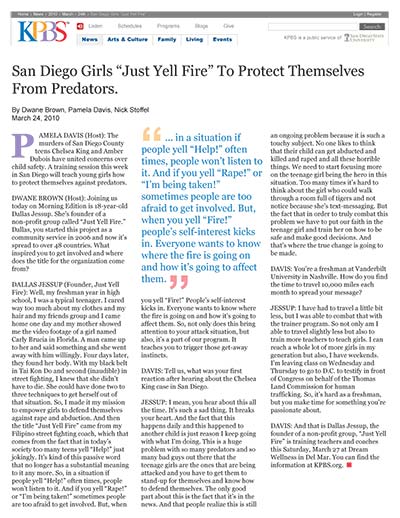 PAMELA DAVIS (Host): The murders of San Diego County teens Chelsea King and Amber Dubois have united concerns over child safety. A training session this week in San Diego will teach young girls how to protect themselves against predators.

DWANE BROWN (Host): Joining us today on Morning Edition is 18-year-old Dallas Jessup. She’s founder of a non-profit group called “Just Yell Fire.” Dallas, you started this project as a community service in 2006 and now it’s spread to over 48 countries. What inspired you to get involved and where does the title for the organization come from?

DALLAS JESSUP (Founder, Just Yell Fire): Well, my freshman year in high school, I was a typical teenager. I cared way too much about my clothes and my hair and my friends group and I came home one day and my mother showed me the video footage of a girl named Carly Brucia in Florida. A man came up to her and said something and she went away with him willingly. Four days later, they found her body. With my black belt in Tai Kon Do and second (inaudible) in street fighting, I knew that she didn’t have to die. She could have done two to three techniques to get herself out of that situation. So, I made it my mission to empower girls to defend themselves against rape and abduction. And then the title “Just Yell Fire” came from my Filipino street fighting coach, which that comes from the fact that in today’s society too many teens yell “Help!” just jokingly. It’s kind of this passive word that no longer has a substantial meaning to it any more. So, in a situation if people yell “Help!” often times, people won’t listen to it. And if you yell “Rape!” or “I’m being taken!” sometimes people are too afraid to get involved. But, when you yell “Fire!” People’s self-interest kicks in. Everyone wants to know where the fire is going on and how it’s going to affect them. So, not only does this bring attention to your attack situation, but also, it’s a part of our program. It teaches you to trigger those get-away instincts.

DAVIS: Tell us, what was your first reaction after hearing about the Chelsea King case in San Diego.

JESSUP: I mean, you hear about this all the time. It’s such a sad thing. It breaks your heart. And the fact that this happens daily and this happened to another child is just reason I keep going with what I’m doing. This is a huge problem with so many predators and so many bad guys out there that the teenage girls are the ones that are being attacked and you have to get them to stand-up for themselves and know how to defend themselves. The only good part about this is the fact that it’s in the news. And that people realize this is still an ongoing problem because it is such a touchy subject. No one likes to think that their child can get abducted and killed and raped and all these horrible things. We need to start focusing more on the teenage girl being the hero in this situation. Too many times it’s hard to think about the girl who could walk through a room full of tigers and not notice because she’s text-messaging. But the fact that in order to truly combat this problem we have to put our faith in the teenage girl and train her on how to be safe and make good decisions. And that’s where the true change is going to be made.

DAVIS: You’re a freshman at Vanderbilt University in Nashville. How do you find the time to travel 10,000 miles each month to spread your message?

JESSUP: I have had to travel a little bit less, but I was able to combat that with the trainer program. So not only am I able to travel slightly less but also to train more teachers to teach girls. I can reach a whole lot of more girls in my generation but also, I have weekends. I’m leaving class on Wednesday and Thursday to go to D.C. to testify in front of Congress on behalf of the Thomas Land Commission for human trafficking. So, it’s hard as a freshman, but you make time for something you’re passionate about.

DAVIS: And that is Dallas Jessup, the founder of a non-profit group, “Just Yell Fire” is training teachers and coaches this Saturday, March 27 at Dream Wellness in Del Mar. You can find the information at KPBS.org.