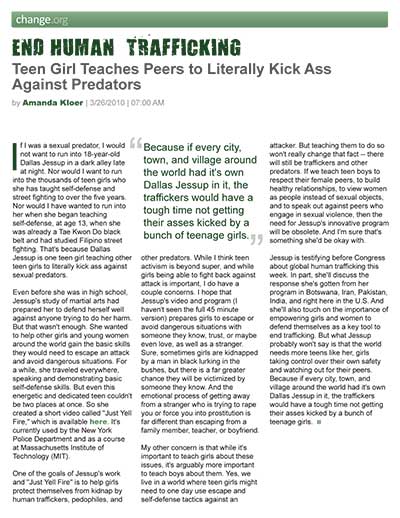 If I was a sexual predator, I would not want to run into 18-year-old Dallas Jessup in a dark alley late at night. Nor would I want to run into the thousands of teen girls who she has taught self-defense and street fighting to over the five years. Nor would I have wanted to run into her when she began teaching self-defense, at age 13, when she was already a Tae Kwon Do black belt and had studied Filipino street fighting. That's because Dallas Jessup is one teen girl teaching other teen girls to literally kick ass against sexual predators.

Even before she was in high school, Jessup's study of martial arts had prepared her to defend herself well against anyone trying to do her harm. But that wasn't enough. She wanted to help other girls and young women around the world gain the basic skills they would need to escape an attack and avoid dangerous situations. For a while, she traveled everywhere, speaking and demonstrating basic self-defense skills. But even this energetic and dedicated teen couldn't be two places at once. So she created a short video called "Just Yell Fire," which is available here. It's currently used by the New York Police Department and as a course at Massachusetts Institute of Technology (MIT).

One of the goals of Jessup's work and "Just Yell Fire" is to help girls protect themselves from kidnap by human traffickers, pedophiles, and other predators. While I think teen activism is beyond super, and while girls being able to fight back against attack is important, I do have a couple concerns. I hope that Jessup's video and program (I haven't seen the full 45 minute version) prepares girls to escape or avoid dangerous situations with someone they know, trust, or maybe even love, as well as a stranger. Sure, sometimes girls are kidnapped by a man in black lurking in the bushes, but there is a far greater chance they will be victimized by someone they know. And the emotional process of getting away from a stranger who is trying to rape you or force you into prostitution is far different than escaping from a family member, teacher, or boyfriend.

My other concern is that while it's important to teach girls about these issues, it's arguably more important to teach boys about them. Yes, we live in a world where teen girls might need to one day use escape and self-defense tactics against an attacker. But teaching them to do so won't really change that fact -- there will still be traffickers and other predators. If we teach teen boys to respect their female peers, to build healthy relationships, to view women as people instead of sexual objects, and to speak out against peers who engage in sexual violence, then the need for Jessup's innovative program will be obsolete. And I'm sure that's something she'd be okay with.

Jessup is testifying before Congress about global human trafficking this week. In part, she'll discuss the response she's gotten from her program in Botswana, Iran, Pakistan, India, and right here in the U.S. And she'll also touch on the importance of empowering girls and women to defend themselves as a key tool to end trafficking. But what Jessup probably won't say is that the world needs more teens like her, girls taking control over their own safety and watching out for their peers. Because if every city, town, and village around the world had it's own Dallas Jessup in it, the traffickers would have a tough time not getting their asses kicked by a bunch of teenage girls.