- It's a frightening statistic facing teenage girls.
One in four is at risk of sexual assault, and each year, there are more than 100,000 attempted abductions in the U.S. alone.
But Dallas Jessup says girls and young women have the right to live their lives, not in fear-- but empowered.
The 17-year-old is the author of the upcoming book "Young Revolutionaries Who Rock: An Insider's Guide to Saving the World One Revolution at a Time."
She is also the founder of the...
Watch Video

PORTLAND, Ore. -- When you think of the Teen Choice Awards you probably think of celebrities, but a local teenager is among this year's nominees.
Dallas Jessup, 16, was nominated for the community service category.
The teen has a black belt in tae kwon do and is certified to teach Filipino street fighting, and she was going to make a home video to show her classmates some ways to get away from bad situations.
But the project turned into a $600,000 film called "Just Yell...
Watch Video 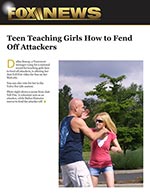 Teen Teaching Girls How To Fend Off Attackers

Dallas Jessup, a Vancouver teenager vying for a national award for teaching girls how to fend off attackers, is offering her Just Yell Fire video for free on her Web site. You can also vote for her in the Volvo For Life contest. Visit her Web site at www.justyellfire.com.

The Coolest High School Project Ever